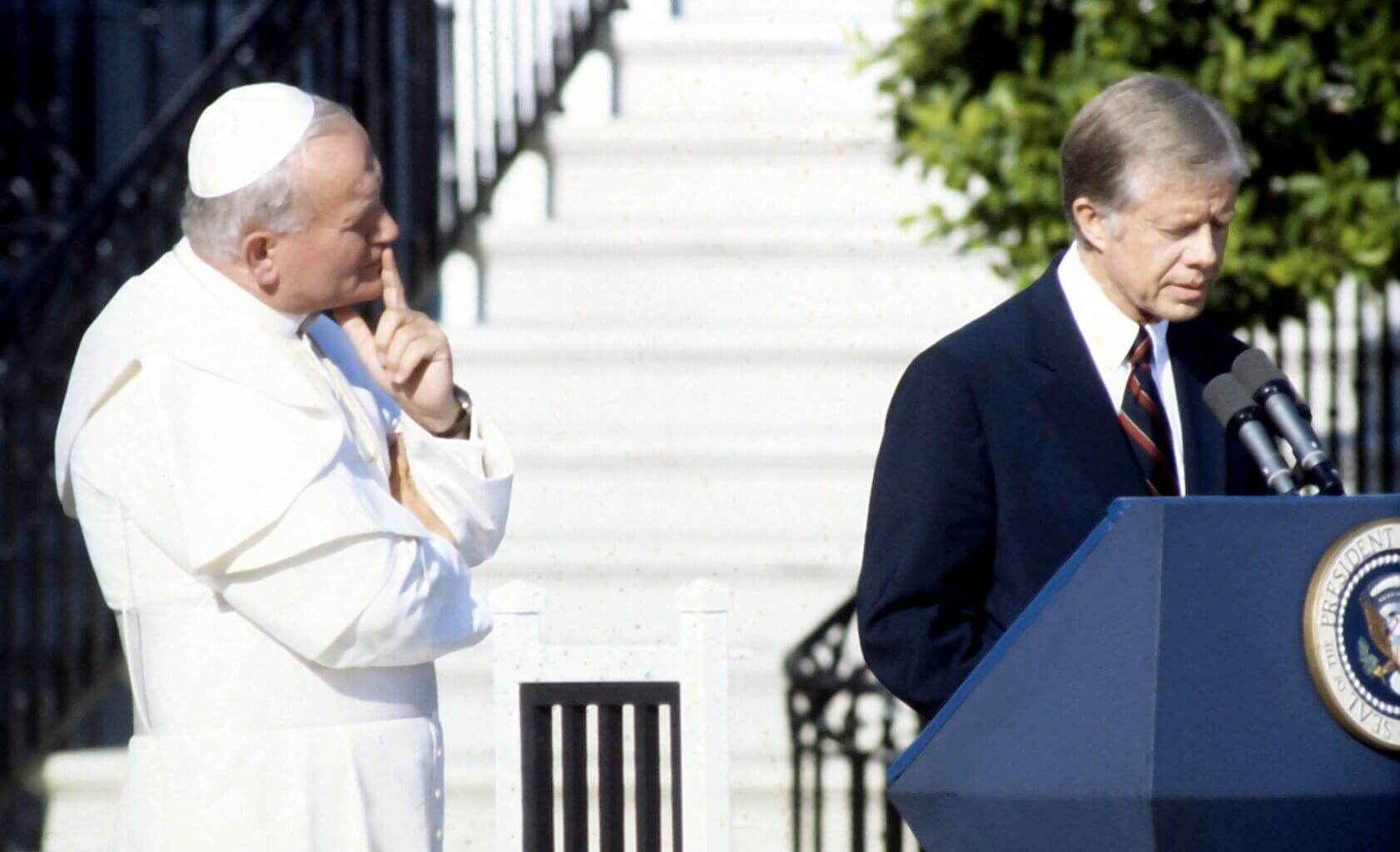 John Paul II not only changed the course of history, but he also helped us to better understand it – writes Mateusz MORAWIECKI

.The​ ​year 2020 is filled with anniversaries, often interconnected, which have a special and significant meaning in the history of Poland. This year, we mark not only the centenary of the birth of Saint John Paul II, but also the centenary of the Battle of Warsaw, which saved Poland and Europe from the advancing Soviet forces. It was thanks to this unprecedented victory of Polish forces that Poland remained a free country. It was a home to young Karol Wojtyla, where he was raised and lived his younger years. The end to this freedom came in 1939, after attacks from the German side on 1st September and the Soviet Union on 17th September. This unassuming boy from Wadowice later became a Pope and helped to defeat the ‘Evil Empire’. It is, without a doubt, one of the most remarkable stories of the 20th century.

On a personal level, who was John Paul II for me? He was a teacher, mentor and, like Saint Paul, he was the rock that built our hope for a free and independent Poland. His teachings have always been present in my home. I was very lucky that my parent’s hearts were filled with love and compassion, the strongest feelings that John Paul II taught us so much about. My mother would bring those teachings to life and follow them in her everyday life. I remember until this day how my late father was anxiously awaiting the Pope’s pilgrimage to Poland. Full of courage and eager to fight for God in these times of commonplace fear and godlessness, he carried a banner which bore the words “​Faith and Independence”​. Communism and the resulting prevailing atheism underestimated the true power of Pope’s teachings, which focused on human dignity at their core. The wealth of intellectual and spiritual teachings of Catholic​ ​personalism offered an alternative to the dark and dull years of the Polish People’s Republic. It was from John Paul II and his teachings that the Solidarity​ ​was born. I would go as far as to say that the revolution started by the Solidarity was the revolution of Christian personalism and human dignity.

John Paul II not only changed the course of history, but he also helped us to better understand it. I have always been passionate about history and Pope’s book ​Memory and Identity​ moved me like no other book. It proves that Christianity and Christian culture are, and have always been, at the heart of Europe. It is often said that historians created nations but, as ​Memory and Identity s​ hows, the origins of Europe are firmly rooted in these two titular concepts. Our Pope used the metaphor of two lungs that Europe used to breathe. This metaphor was used to unite the European continent and destroy the artificial division introduced by the Iron Curtain. It is our duty to preserve and care for this heritage: we have to preserve the memory of our nations and great heroes. However, we can never forget about the dark and difficult times in our pasts. If we do not preserve these memories, we will be forever lost, and we will lose our identity.

We should believe in the beauty of Europe, just like John Paul II did. He loved its nature, following​ in​ the footsteps of Saint Francis. Following the example of his great spiritual and intellectual mentors, Saint Thomas Aquinas, Saint John of​ ​the Cross and Max Scheler, he would appreciate its culture. He believed in Europe, despite the fact that the Pope lived during a period when it was easy to lose faith in the core European values. As as young adult, he survived the occupation of Poland by Nazi Germany. In the years after the war, the communist government of Poland would often try to intimidate him, as he was a prominent representative of the Polish Catholic Church. He was one of only a handful of people that could truly understand the true

horrors and evil that European nations had to suffer under these two totalitarian regimes. Even today, it is almost impossible to imagine the immense devastation that the Eastern lung of Europe had to suffer. Millions of innocent lives were lost in Poland during the brutal years of the Second World War. This makes Poland, my homeland, one of the countries most scarred by the European totalitarian governments of the 20th century. But it is from this “far-away land” that the spiritual renewal of the modern world originated from.

With his arrival in Rome, Saint John Paul II brought with him the message of Saint Faustyna Kowalska about the Divine Mercy, later beatified and canonised during his papacy. His Encyclical ​Dives in misericordia​ originates from Saint Faustyna’s teachings of the Divine Mercy. John Paul II teaches us that the Divine Mercy in its fullest and clearest form is fulfillment, spiritual growth, unearthing the good from layers of evil that are present in us and all over the world. As we fight the coronavirus pandemic in Europe and all around the world, we have to recognise our need of going back to the fundamental teaching of the Pope of mercy and solidarity. As our continent is being ravaged by this disease, we need to turn to God and the Divine Mercy for strength. The poorest, oldest and the most vulnerable members of our society need our help more than ever and it is our duty to help them. In these scary and uncertain times we remember and praise our health workers – their will and determination, their fight and often ultimate sacrifice in the war with the virus. They are not only professionals doing their jobs; they are also the living personification of hope.

.The message of hope was often present in the teaching of Saint John Paul II. Those teachings were relevant then, as the world was in crisis throughout a significant part of his papacy, but are also relevant today as we together fight this new global health crisis. The Pope taught us that we have to be clever with hope, that we cannot be optimistic no matter what, and that our expectations have to be based in facts. We have to hope and believe that we can build a better world than the one we live in today. We need that kind of hope today as we find ourselves in the middle of one of the worst economic recessions, caused by the coronavirus pandemic. We can find this hope in the teachings of John Paul II – the Pope of fulfilled hopes. It was the Pope’s sermon that lifted the spirits of his fellow countrymen as he addressed then in Warsaw in 1979: “​And I cry – I, who is a son of the land of Poland and who is also Pope John Paul II – I cry from all the depths of this Millennium, I cry on the vigil of Pentecost: Let your Spirit descend! Let your Spirit descend! And renew the face of the Earth. The face of this land!”. These words were heard in Gdansk where the ​Solidarity ​was born. They were also heard in Berlin before the fall of the Berlin Wall that led to the fall of the Iron Curtain. They were heard across the entirety of​ ​Europe and renewed the face of the Earth. Let these words be heard today as well in every European city, region and country fighting the pandemic. Let them bring hope, solidarity and healing to every corner of our continent.

This content is protected by copyright. Any further distribution without the authors permission is forbidden. 17/05/2020
Karol Wojtyła Pope John Paul II