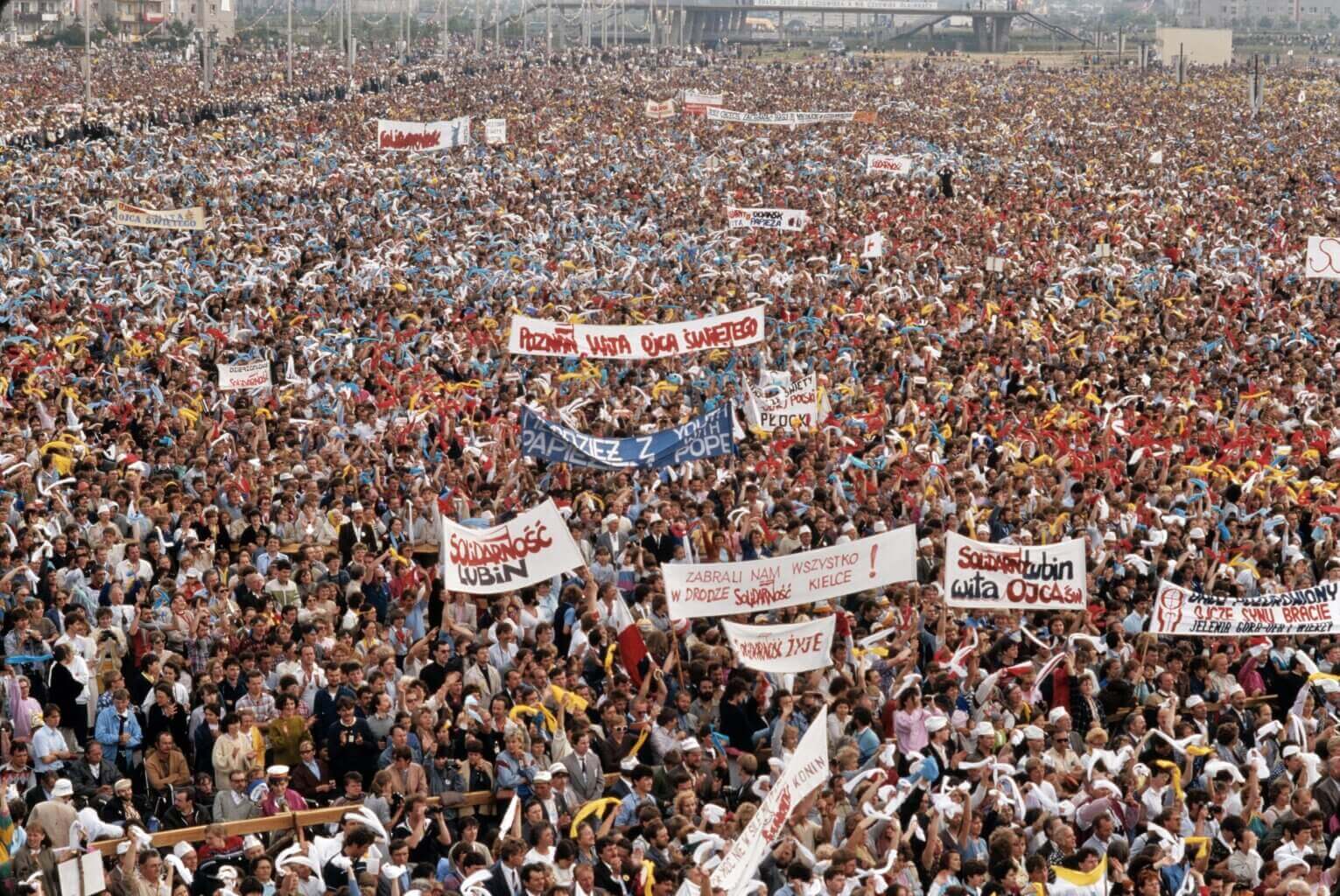 The Pope’s message largely contributed to the creation of “Solidarity”, perhaps the largest in history social movement considering the size of the country’s population – writes Prof. Wojciech ROSZKOWSKI

In the evening on 16th October 1978, the news that cardinal Karol Wojtyła, who was 58 years old at that time, was elected pope electrified the world. In the vast majority of Polish homes in the country and abroad, the mood of extraordinary joy prevailed.

The leadership of the Polish communist party, aghast, realised that the government of souls of the Polish people had slipped out of their hands. A week later, the solemn inauguration of the pontificate of John Paul II took place and was broadcast by television stations around the world, including Polish television.

Poles could finally grasp the significance of choosing John Paul II as pope in global terms. The elevation of a fellow Pole to the Holy See, the sudden increase in interest in Poland around the world and the 60th anniversary of its independence in November 1978, all prompted the broad social circles to reconsider Poland’s place in the world and the opportunities ahead.

Increasingly often, people would realise that Poland, forcefully pushed after 1945 into the Soviet bloc against the will of Poles, was in need of thorough reforms. The awareness of the necessity of changes or the otherwise collapse of the communist system was ripening even in some party circles. Meanwhile, the leadership of the Polish United Workers’ Party did not contemplate any reforms whatsoever. By means of paralysing social initiatives and repression of opposition activists, Edward Gierek’s administration undertook ad hoc administrative steps and organised propaganda performances that convinced hardly anyone.

The pilgrimage of John Paul II to Poland from 2nd until 10th June 1979 was of historical significance. It strengthened the faith of believers and supported the hope of the whole society.

Throughout all stages of his journey, all the way from Warsaw to Cracow where the Pope bid farewell to his homeland at Balice airport, all of Poland lived in a state of euphoria. Many millions of Poles participated in person in the meetings with the Pope.

The papal pilgrimage provided the Polish nation with the opportunity to learn about themselves and to strengthen the sense of national unity. To the world informed by more than a thousand journalists and numerous television stations, it showed that Polish Catholicism is not only emotional, of folk nature and of mass character, but also deep and disciplined.

The Pope got on extremely well with every audience. During those “nine days that shook Poland”, the public would finish with applause the thoughts that the Pope did not say, and declared their will to live in dignity, sovereignty, and attachment to Christian tradition.

A prolonged ovation during the mass on Victory Square on 2nd June followed the words of the Holy Father: “Christ cannot be excluded from man’s history anywhere in the world”. The hymn “We want God” intoned at that moment conveyed a special meaning. The Christian message was in tune with the national one. And by touching upon political issues, the Pope spoke the truth to “each and every one”, often seasoning it with bitterness arising from past Polish experiences. In Warsaw, for example, he mentioned the uprising of 1944 when the Polish capital was “abandoned in battle by allied powers”. Saying goodbye to his homeland in Błonia in Cracow, he said: “Before I leave here, I am asking you (…) that you may never doubt and get tired or discouraged, that you yourselves do not cut the roots from which we grow out”.

This appeal became strongly embedded in the consciousness of an entire generation of Poles, shaping their attitude in the coming decades. As George Weigel wrote, “kindled was the revolution of spirit” whose strength came from John Paul II’s faith, but also from the Polish cultural heritage, from the works of Adam Mickiewicz, Juliusz Słowacki or Cyprian Kamil Norwid and numerous Polish saints.

The Pope’s message largely contributed to the creation of “Solidarity”, perhaps the largest in history social movement considering the size of the country’s population.

However, this message went far beyond Polish affairs. The fact that a citizen of a state within the Soviet bloc became pope made public opinion aware that the Cold War division of the world is artificial and does not have to be eternal. In his Gniezno homily on 3rd June 1979, the Pope outlined a dynamic vision of a European community embedded in Christianity, recalling the Christianisation of Eastern European nations, which are one with the rest of the continent.

This very speech must have particularly worried the Soviet leadership. On 7th June that year, John Paul II said in the Auschwitz camp: “Under no circumstances may one nation develop at the expense of another”, and the meaning of this statement also had an undoubtedly contemporary dimension.

Throughout more than a quarter of a century across recent history, John Paul II visited over one hundred countries. In many places he awakened the spirit of justice in societies and among political elites. By repeating the motto “Have no fear!”, he noticeably contributed to the erosion of the foundation of the communist system, which was fear itself. External observers of papal pilgrimages observed that communist rule by coercion had nothing to do with social or economic liberation, and that Christianity was much closer to the protection of human rights. In a similar spirit, John Paul II impacted the mitigation of social and international conflicts in the Third World, but above all else, he advanced the end of the Cold War.

When the President of the US Ronald Reagan spoke in West Berlin in 1987 the words “Mr. Gorbachev, tear down this wall!”, the ground for this change had already been well prepared by John Paul II.

This content is protected by copyright. Any further distribution without the authors permission is forbidden. 15/05/2020
Pope John Paul II