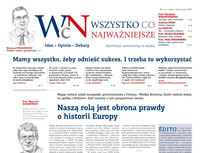 Since the opening of permanent railway connection with the Chinese city of Chengdu Łódź has been an aspiring gate to Chineurope, the biggest land economic structure in the world’s history. Expo 2022 in Łódź should become an opportunity for intellectuals, strategists, politicians and planners to brainstorm on the challenges of the future – writes Waldemar PAWLAK

.The period of symbiosis of the USA and China called Chimerica (which is a term coined by Niall Ferguson and used in his book The Ascent of Money) is almost gone. Will it be replaced by Rusmerica, a deepened co-operation between the USA and Russia in opposition to China, or perhaps China will create the New Silk Road through Russia and Poland to Europe and thus Chineurope will be made? That would be the biggest economic structure on land in the history of the world, which would limit the role of the sea powers. Geography and the modern technologies of land transport are in favour. Poland must answer the question if what it wants is to be on the road or on its verge. This is what this text is about. It contains an attempt of a closer look at the third decade of 21st century.

The world can be looked upon from various perspectives. The most common indicator of the welfare of societies and countries is GDP (Gross Domestic Product). Although it is not a perfect measure, it provides a general overview of the condition of a country or a region. Other useful indicators are: population, strength of army (and especially possession of nuclear weapons), strength of currency, capitalization of stock exchange, vote in the United Nations Security Council and access to technologies and resources.

Looking through such filters one can distinguish three predominant centres: the US (NAFTA), the EU and China. Let us imagine them as marine carriers.

Then there are a few countries/regions, as if ships of lesser displacement, yet still important ones, e.g. India, South America, Africa, Japan or even Great Britain that has been going through Brexit. Also there are regions which used to be strategic players between West and East, such as the Middle East, but they have already for a long time been unstable sources of tensions and risk.

After the fall of the USSR the USA dominated the world for a certain period of time. The other players accepted the American patronage, because then it was comfortable and cheap. The idyll started to rust around the year 2000. The dot-com bubble crash which then killed the bull market after ca 25 years is a story hardly remembered these days. That was the first serious global financial crisis after the 70s oil crises. Nothing lasts forever. After the flash of unipolar global order with American leadership in late 20th and early 21st century the world has disintegrated into a few regions with prevailing countries at the helm of each of them.

Two processes, internal and external, merged in the USA. The country did not manage to sustain its world dominance, which was caused by factors it could not control, like development and economic independence of China, also in a sense Russia’s return to power built on high prices of oil until 2014. What the USA could have had a better control of, however, is the situation after the terrorist attacks of September 11th. The words of Napoleon Bonaparte once again proved to be true: ”you can do anything with bayonets except sit on them”. Afghanistan and Iraq were not willing to adapt to the American model of liberal democracy. Moreover, the Arab revolution of 2011 evoked chaos and subsequent waves of migration reaching Europe.

The internal processes include the huge financial crisis of 2008 (it had a worldwide impact, but was particularly devastating within the USA, especially in building industry), which undermined the trust in the American ways of doing business. All that overlapped with the frustration evoked by the most recent presidential campaign won by Donald Trump. The latter terminated the TTP, pointed his finger at China and irritated Europe. He announced building the wall on the border with Mexico. All in all, America has stepped back and taken care of itself. President Donald Trump wants to make America great again, whereas now it is not great even in his own eyes…

The Europe of the outraged

The EU has been getting through the painful divorce with Great Britain (worth ca 2.8 trillion USD, which means a decrease to 18% of the world GDP) and massive influx of migrants from the south. After a brief moment of shock the European bureaucracy and politicians have gone back to ”making butter”, i.e. to the endless dignified and responsible discussions. Nonetheless Europe has to face a few extreme test this year: elections in France, Germany and the Netherlands. In 2010 the French writer and diplomat Stéphane Hessel very emotionally heralded ”Time for Outrage!”. In 2012 the Spanish sociologist Manuel Castells referred to the subject more methodically in his book Networks of Outrage and Hope.

Unfortunately there is no hope, only outrage, which makes ground for the rise of horsemen of the apocalypse in Europe. It is a sort of politicians who are ready for merciless fight for power. In order to achieve that they claim that first they need to bring chaos, so that immediately afterwards order can be reinstated. Rationality, common sense and welfare seem lukewarm when compared with the fever of the ones that are infected with the virus of the need to change the world. The outraged hope to find the cure in destruction of the everyday reality.

Meanwhile China has undergone an economic and political remake after the ascent of the new generation of leaders in 2012 and has so far retained its growth rate. The Chinese president in his speeches presents his dream of the ”rebirth of the nation”, which means the country openly aspires again to a leading role in international affairs. It is as if the Chinese said ”we have just made China great again”.

The pillar of the new Chinese offer for the world, and more precisely for the EU and Russia, is the New Silk Road, an overland route of transportation of goods connecting China with Europe via Russia and Poland. Chineurope is born, the most powerful land economic structure ever created. For us, people from the West, it may be worthwhile to quote a Chinese employee of Asian Infrastructure Investment Bank who said to his European colleague: ”the New Silk Road will be made in the medium term, so within, say, 40 years!”. This equals 10 parliamentary terms in Europe or America, but only 4 generations of Chinese leaders. The quoted outburst of enthusiasm is a strong proof of differences in Eastern and Western ways of thinking of time and space.

Perhaps Americans will try to make an inverted Kissinger maneouvre? The outcome of the future first Trump-Putin meeting will bring some answers. In the 70s of the 20th century the USA and China were allied again the USSR and the success of the alliance was bigger than expected. Now a new game can be proposed to Russia to be played against China. The former is a serious player due to its geopolitical location, much less owing to its military or economic strength. Rusmerica, the potential close co-operation of the US and Russia, might result from the temptation to play an imperial game for a return to a bipolar world based on weapons and controlling the spheres of influence, not on globalization of trade.

The USA used to isolate Russia from Europe for years, which was described by George Friedman in The Next Decade. The war of Russia with Ukraine cancelled the official co-operation of the former with Europe. In Minsk Germany and France (the so called Normandy format) tried to make a deal with Russia without the USA, but Russia could not sacrifice even a small part of its temporary political prestige for long-term economic benefits. It is likely that Russia counts on a European revolution. A few mighty potential Russian allies have emerged in recent months, one of them is the new president of Germany Frank-Walter Steinmeier. The winner of the presidential election in France in April will be a better friend of Russia than the current president François Hollande. Thus Russia has become the fourth big player – and the least recognized one. The country’s main strength lies in being located between China and Europe.

Both of the aforementioned seem to have the economy at the top of their priority lists, whereas the US of Donald Trump is moving from the economy towards the military, becoming a desired partner for Russia in its political and military poker game. Very interesting forecasts of the fate of the world in coming years have been presented by Ian Morris in his book Why the West Rules – For Now. It shows that the most important factor is location. Paradoxically, the key location between China and Europe is occupied by Russia and Poland. As a real estate investor Trump knows very well how much good location means. Thus we can expect that the third decade of the 20th century will not be dull at all…

Poland: on the road or on the verge?

Where will Poland find itself in such global conditions? I say ”find itself” for a reason. Unlike when our strategic decisions and actions aimed at joining NATO and the EU depended on our energy and consistency, now we need to be prepared for either a fast free ride or staying in a lay-by. Considering the positive scenario first, the making by China of the New Silk Road is an exceptional opportunity for Poland to become a partner, as we are a transit country for the transport of goods between Europe and China and the importance of our location would increase significantly.

On the other hand, the USA-Russia deal scenario would incur incalculable risks. America would probably try to isolate Russia from Europe and in such circumstances Poland would be excluded from the big game. The biggest challenge for Poland then is to find a way to more rational relations with Russia. The most difficult task for the Polish government is the jibe in order to redefine our relations with Russia, in response to the needs of either the USA or China.

Remaining at the optimistic scenario, it is worth calling for and promoting efforts made by Łódź to organize Expo 2022 under the nickname/slogan City Reinvented. Łódź as focusing lens for better future. There ends the most important intercontinental transport route: the New Silk Road connecting China and Europe via Russia and Poland. Since the opening of permanent railway connection with the Chinese city of Chengdu Łódź has been an aspiring gate to Chineurope, the biggest land economic structure in the world’s history. City Reinvented, or the revitalized city, as Łódź has been introduced in the context of Expo 2022, is not an idea that would only concern the city itself, but in wider perspective also attitude to the world, geopolitics, strategic alliances.

Expo 2022 in Łódź should become an opportunity for intellectuals, strategists, politicians and planners to brainstorm on the challenges of the future. The efforts for Expo 2022 shall create a good climate for positive actions and conditions for Poland’s active participation in European and global politics. Moreover, it may get nationwide support on all governmental and communal levels across the entire political spectrum. Let it mark the return of solidarity to our divided country.