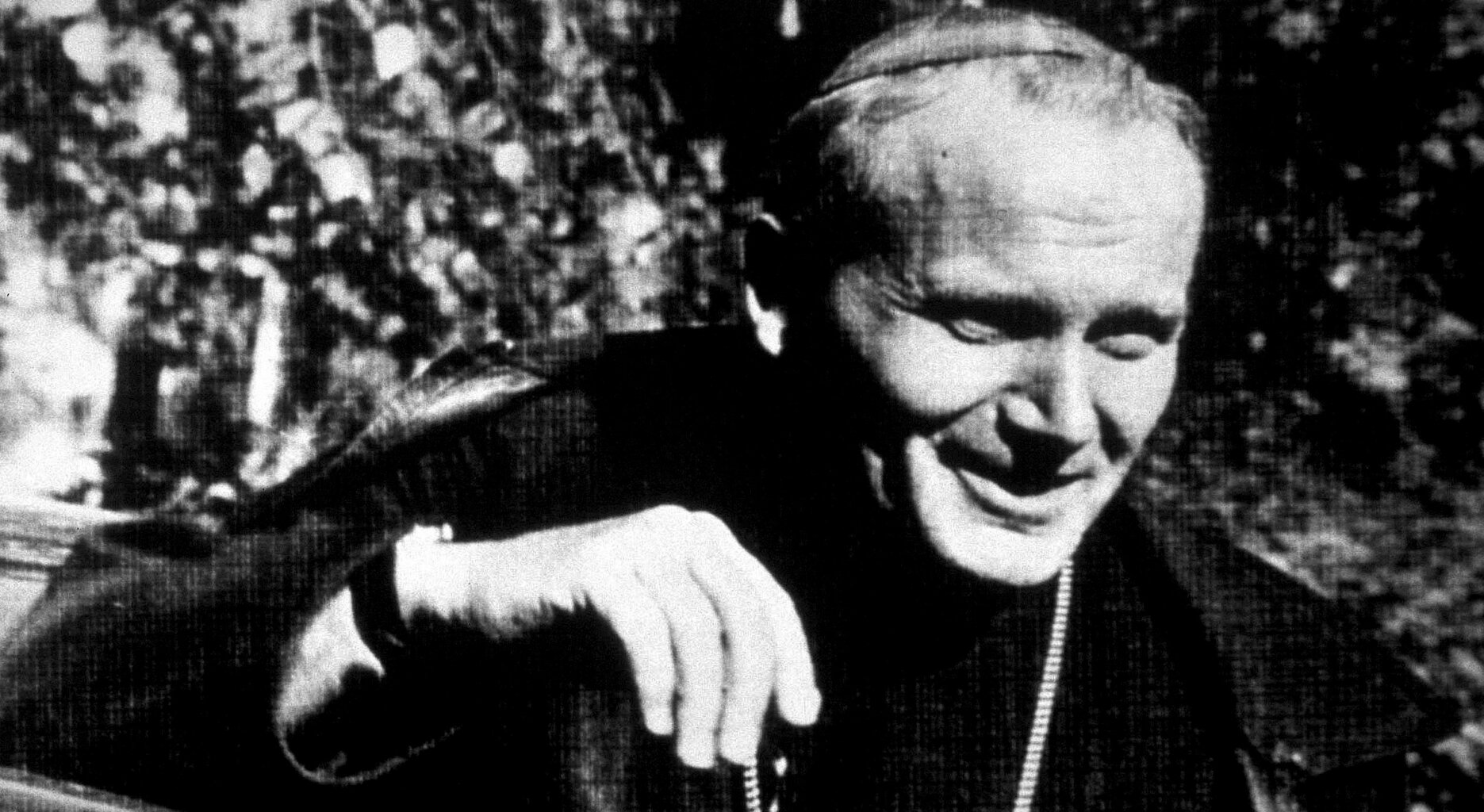 Dominican, theologian, philosopher and publicist, in the years 1998–2006 provincial of the Polish Dominican Province, in the years 2007–2010 director of the European Solidarity Center in Gdańsk. Founder and president of the Tertio Millennio Institute. Doctor of philosophy at the Pontifical Academy of Theology in Krakow.

John Paul II was also the first Pope to have acknowledged the role of the democratic state of law and free-market economy – writes o. Maciej ZIĘBA OP

“This boy from Poland traveled his path impressively and without ever faltering,” Matthias Matussek wrote in Der Spiegel fifteen years ago. “We owe him a debt of gratitude for his tremendous courage and love, for his willingness to fight and his unwillingness to compromise that protected the faith from trivialization and are the legacy of the Catholic Church.”

Does hindsight validate the opinion of the renowned German journalist? The fifteen years that passed since the death of Karol Wojtyła, and the recently observed centennial anniversary of his birth allow us to look at the legacy of the “boy from Poland” from a distance.

Unity of the Church

The primary task Karol Wojtyla had to deal with was to reconstruct the unity of the Church. Since the Second Vatican Council, the Church continued to be torn by tensions – the fight between “liberals” and “traditionalists” and their diverse approach to reforms in local Churches came in addition to a dramatic drop in vocations and the secularization of Western Europe. “The Catholic Church was in decay. Following the Second Vatican Council, it kept turning into a coalition of local Churches that became increasingly different from one another,” the then U.S. national security adviser Zbigniew Brzezinski assessed. Wojtyla’s response to that challenge were the 104 pilgrimages he took to visit Churches across the globe, during which he covered four times the distance from Earth to Moon to bring the abstract Papacy closer to millions of Catholics in all continents. Another form of unity building was his decision to edit the Catechism, the first one in almost five centuries, that presented the Church’s principles of faith to the faithful all over the world. Still another form – in defiance of the opposition from many Bishops who thought that efforts to transfer the Polish “conservative” experience to the secular Western world of consumerism will only bring discredit – was the concept of the World Youth Day. All those efforts proved to be an enormous success and helped rebuild the sense of common Catholic identity.

All that, however, did not mean focusing on the issues of the Church only, the unity being a precondition for opening up to the world. John Paul II was the first Pope to have entered a synagogue (1986), a mosque (in 2001, when, even worse, he kissed the Quran, something the “traditionalists” cannot forgive him up to date), and a Buddhist temple (1984). It was his initiative to inaugurate the prayers for peace in Assisi in 1986, with representatives of various Churches and religions from all over the world. He outlined his program of the dialogue between religions during his visit to Israel in 2000, when he encouraged us to “listen with respect to one another, try to recognize what is good and sacred in other faiths, and cooperate on everything that contributes to understanding and peace.” Commenting on that visit, the Chairman of Yad Vashem said: “The Pope builds bridges over the rivers of blood.”

The conferences in Castel Gandolfo can be also seen as the symbol of opening up to the world, with the debates on modern challenges participated in by Hans-Georg Gadamer and Paul Ricoeur, outstanding representatives of hermeneutics; communitarian  Charles Taylor; philosopher of dialogue Emmanuel Levinas; professor of philosophy, logic, and scientific method Ernest Gellner; historian of ideas Leszek Kolakowski; as well as prominent historians like the founder of microhistory Emmanuel Le Roy Ladurie, historian of the French Revolution François Furet, or Gertrude Himmelfarb, an authority in the studies of contemporary history of England and the United States; as well as famous sociologists like Sir Ralf Dahrendorf or Edward Shils, or physicists, like the splendid Carl-Friedrich von Weizsaecker who specialized in quantum physics. Those were the meetings of the brightest minds at the turn of the 21st century that rallied around John Paul II to represent various faiths and religions in a free discourse, and quite often to confess lack of faith.

One aspect of the opening to the world was also the call for reflection upon the errors of the Church in the past and today. Originating from this idea were the conferences in the Vatican devoted to Jan Hus, Galileo, and anti-Judaism in history of the Church; hence the concept to make confession of sins committed in the past part of the five-year program of preparations for the year 2000. Or, regarding some of contemporary issues, the fight with the scandal of pedophilia – preliminarily (since 1995) in the Church in the United States, and extended in 2001 to include the entire Church, with the “zero tolerance” norm and the obligation to unfrock the offenders.

John Paul II “defended all-human values with clear and strong voice. This is a rare thing. India had Mahatma Gandhi, South Africa had Mandela, but with due respect to them, no one can be compared to Karol Wojtyla in the global sense,” Richard von Weizsaecker, former German President said, thus summing up the manifold and longtime activities of John Paul II who made human rights the priority of his pontificate. His strategy was aptly described by Patricio Navia, the Chilean political scientist of New York University, who showed the fiasco of Pinochet policy aimed at taking advantage of the papal visit to validate his dictatorship. Pinochet was wrong, because, as Navia noticed, “even though John Paul II was anti-communist, he, unlike the dictatorship, was a fierce defender of life and human rights. The Pope knew he would be criticized but he believed the visit will trigger democratic changes in Chile. And this did happen – taking advantage of the protection the Pope’s presence ensured them, thousands of the Chilean people could protest against Pinochet for the first time ever. This undermined the foundations of the culture of fear, so successfully imprinted in us. By his meetings with the poor and the excluded, by reiterating that ‘the poor cannot wait,’ the Pope also sorely exposed the gaps of the regime’s economic policy. In Chile, where 40 percent of the country’s population lived then in poverty, the Pope’s words were tantamount to conviction for Pinochet.” Many an autocrat similarly miscalculated, including General Stroessner in Paraguay, General Bignone in Argentina, General Jaruzelski in Poland, President Marcos in the Philippines, President Ortega in Nicaragua, or President Duvalier in Haiti. “This Pope had an uncanny knack for appearing at the critical moment in various parts of the world to lead the societies to freedom, to democracy,” Samuel Huntington of Harvard wrote.

John Paul II was also the first Pope to have acknowledged the role of the democratic state of law and free-market economy. But just as he pointed out their values and their positive role, he also reminded that a free market is not a self-regulatory mechanism, and democracy is not only about the opportunity to vote. “Today, an individual often feels stifled between two extremes – the state and the market,” he wrote and indicated they require both the soil of ethics and an individual character that is subservient to a person. In a similar manner, he addressed the issue of environment protection, something he cared about since the very beginning of his pontificate. The fight for the reduction of harmful substances is secondary to the problems of “human ecology”; in other words, we should transform culture in such a way to make sure that extreme consumerism and pursuit of growth of profit rates cease to be our idols.

“The Church and the world will be well into the twenty-first century, and perhaps far beyond, before Catholic theology has fully assimilated the contents of these 130 general audience addresses. If it is taken with the seriousness it deserves, John Paul’s Theology of the Body may prove to be the decisive moment in exorcising the Manichaean demon and its depreciation of human sexuality from Catholic moral theology,” George Weigel, biographer of John Paul II wrote. The series of homilies covering several years describe human sexuality in a positive, dynamic, and person-centered manner. But, and this is the Pope’s leitmotif, this is connected to the rebuilding of culture which is patriarchal in nature. Therefore, as he wrote many times in his addresses, encyclicals, and two letters devoted to the dignity of woman, the fight for the fifty-percent quota is secondary to the transformation of culture so it allows a full-fledged participation of the “genius of woman.” “The secret behind how to fast cover the distance to the full respect of woman identity consists not only in exposing, as much as it is needed, the discrimination and injustice, but also and above all in elaborating a specific program of development to include all spheres of woman’s life, which has at its foundation the need for all to become aware anew of woman’s dignity” (emphasized by John Paul II).

While each and every of these topics require a separate study, there is one dimension that escapes any analysis – it is dying. At this most trying moment, when sycophants are silent and no one cares about PR anymore, dying becomes exclusively the testimony. It was the finale to one’s service to the world, where liveliness, fitness, success, effectiveness, ratings and viewership seem to be seen as idols. Through his helplessness and disease, the Pope taught us the lesson of humanity. Just weeks before the Pope’s death Andrea Camilleri, Italian writer, the authority of the left and a declared atheist, wrote: “John Paul II represents a species that is rare today, one that knows what it means to suffer. He knows what grain it takes to yield a crop. His relationship with life is so shockingly true and entirely alien to the artificial media world. That the media today show his suffering testifies to his triumph over the TV pulp.  He is a great man, there is no one like him anymore.”

This content is protected by copyright. Any further distribution without the authors permission is forbidden. 16/05/2020
29.08.1967. Olycom / Forum
John Paul II